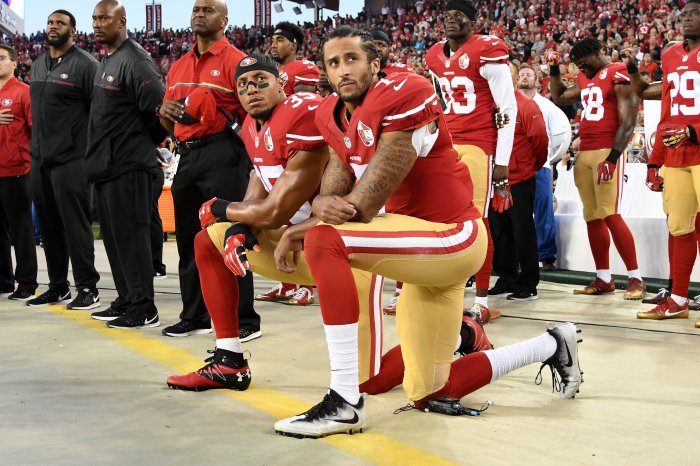 In what seems like a lifetime ago, Colin Kaepernick of the San Francisco 49ers became an instantly polarizing figure in not only our sports media, but also our overall political discussion. When he chose to sit rather than stand for the playing of the National Anthem and then subsequently defended his action by calling to attention the injustices of America, a rain of hot takes fell upon him.

I, myself, initially winced when the story first broke. I understood the general point Kaepernick was trying to make, but I knew the predictable storm of media types questioning his patriotism would ensue. The connection between the anthem and respect for our military was easily drawn and I held a great fear that his message would ultimately be drowned out.

What many couldn’t have necessarily predicted was just how large of a story this ended up becoming. The media spotlight from the NFL also magnified by the current tumultuous political climate made for the action of not standing for a national anthem the top story for weeks on end.

While of course some level of attention is the whole purpose of a protest, I firmly believe Kaepernick had no inclination himself that he would instantaneously be pushed into the center of such a fervent a nationwide debate. My best guess is that his decision was made sometime not all that long before that particular game, and if he was asked about it later on, then so be it. There’s a pretty stark visual difference in the way he sort of non-chalantly sat by himself the first time he was caught on camera not participating in the anthem, and later throughout the year when he was shown kneeling with teammates. While he was ready with an answer for actions, his positions have been appeared more thought out since the initial hoopla of the entire situation.

Anyone advocating for social justice can probably admit, Colin Kaepernick in 2016 was not the top pick for our spokesperson. But given all that has transpired, the message could have been lost. With endorsement deals and team media relations at stake, no one would totally blame Colin for easing up on his stance a little, as have many other professional athletes who have made similar statements and gestures.

We even see early on (this interview was soon after this all became a story) that Kaepernick had thoroughly considered the justifications for his actions, explaining that he’s bringing awareness to injustice for people without his same level of platform:

What it is that we have seen is that clearly Kaepernick have been in touch with the right people, and turned what might not have initially been well thought out, to be something especially smart and poignant… most of the time.

So let’s get this part out the way. First, here is where I think he’s missed the message: 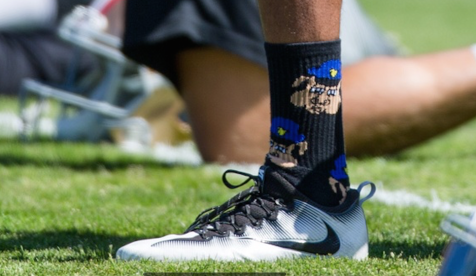 Photos emerged of a pair of socks Kaepernick wore at practice depicting pigs in police attire. In actuality, the photos were from a time before he decided to sit out the anthem, but the fact remains, regardless of the exact timeline, this was a bad visual for someone trying to shed light on the inhumanity of police violence while himself not seeming antagonistic. This lends credence to my theory of Kaepernick not realizing how much coverage this story would win up receiving as this particular demonstration was easy fodder for his detractors. 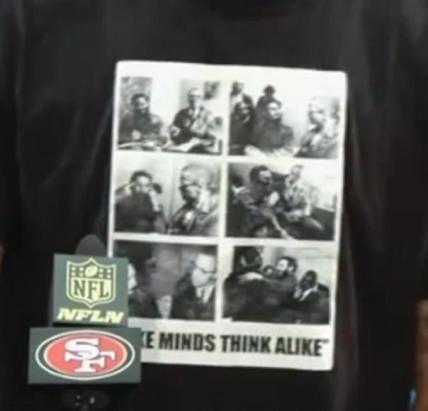 The second image was one where of him wearing a t-shirt depicting a meeting between Malcolm X and Fidel Castro. The relationship between people of color in America and the legacy of Castro is one that is complicated. Castro is credited with working with Nelson Mandela and helping to end apartheid in South Africa. Castro also helped to liberate many Latin American countries in the Caribbean and South America. However, as was adamantly expressed to Colin by members of the South Florida media, the tyrannous and horrific actions against his own Cuban people cannot be ignored. Kaepernick had his reasons, citing historical importance and heavy investment of education, but again, he angered a significant population.

Lastly, but most important, he didn’t vote in the 2016 election. This wasn’t totally a surprise to anyone following his interviews closely, as Kaepernick had said he found extreme flaws in both presidential candidates, but many thought he still missed a larger opportunity. As far as the presidential election went: it’s true that both candidates had enormous flaws, and it’s true that his one vote in the heavily liberal-skewed California would have not mattered much mathematically. However, one candidate’s campaign largely opposed basic civil rights measures, and there were several items further down the ballot that were more challenged and still of significance. In an election where voter turn out was low, someone who was in the public eye as much as Colin Kaepernick in these times could have better helped to serve as an example by participating in the democratic process.

That’s the rub about being infamous. Every action you make is nitpicked and examined under a magnifying glass. So now look at what he’s done right in my opinion:

Folks quick to criticize athletes for what they do on of off their respective fields of play will often point to the money the athletes make. For thrown interception or a political stance you might not agree with, the athletes are overpaid and should therefore “act better”. Well in the case of Colin Kaepernick, he pledged a million dollars of his own money along with the proceeds from his jersey sales, in a time when his NFL future is uncertain, and his current contract is only but so guaranteed, towards organizations working in oppressed communities (you can follow the donations at kaepernick7.com)

His Fully-Funded “Know Your Rights” camp 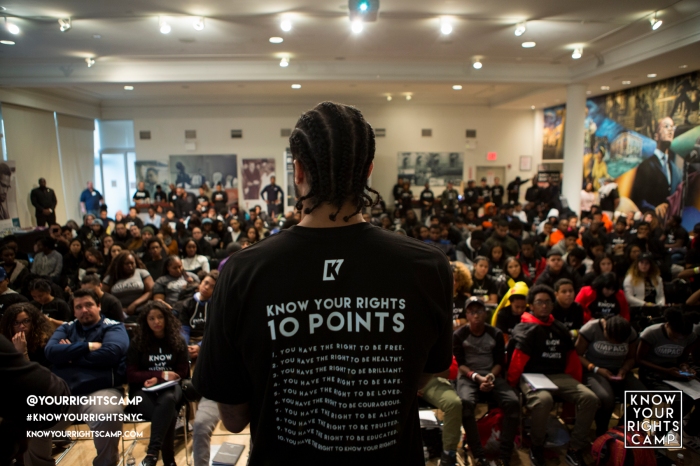 He’s been touring the country and putting on very comprehensive educational seminars called the Know Your Rights Camp. Kaepernick’s programming is aimed at otherwise disenfranchised teens and teaches awareness on higher education, self-empowerment, and instruction on how to properly interact with law enforcement in various scenarios. These camps have been successful in linking teens to proper guidance on applying to college in areas where proper counselors are a precious commodity, they have addressed education in financial literacy not taught in most school systems, and have provided the teens with relevant health resources. As an added bonus, the camp participants were given free DNA test kits so that they were able to find out the details of their races and ethnicities to celebrate from where all they have come. With interactions between Black Americans and the Police being the center of the injustices Kaepernick was protesting in the first place, it’s substantial that he address the youth of our nation on how to best conduct themselves with specifics past simply pleading that everyone act polite. With racial profiling and legal measures such as Stop-and-Frisk as a part of the history of interactions between minorities and the police force, it’s important to address and educate the youth on the entirety of the legal system so that all parties involved can be fully informed.

I suggest you check out the quick video summary below of the camp:

Lastly, it may seem insignificant, but throughout his social media platforms Kaepernick has spotlighted different Civil Rights Leaders throughout American History. We certainly have the opportunity to learn about Black history on MLK Jr Day or during Black History month, but overall it’s safe to admit that most of us only know a handful of the important figures shaping our country today. Again, there’s an enormous media spotlight on everything Kaepernick says or does. He could easily be promoting his self-interests, but instead, he uses his major following to educate us all.

We live in a social media world where a lot of fuss and noise can easily gain traction and become a big story, followed up with minimal resolution. In the case of injustice for black and brown Americans, we see Colin Kaepernick actually “putting his money where his mouth is,” both figuratively and literally. Facebook was abuzz with a whole lot of terrible comparison memes and folks claiming Kaepernick should roll up his sleeves and “get to work.” And what we’ve seen is Kaepernick doing just that, plus a whole lot more. Truth is, it would have been fine if he didn’t do half of what he has accomplished. It’s going to take a whole lot more than education seminars to address a complex societal monolith that is the relationship between minorities and the Police. So in reality, by just kneeling for the anthem and getting us all to talk about that relationship, he’s already done his part. Donating his hard-earned money and putting real effort into organizing communities across America is well above and beyond what we should be asking of someone is his position. The fight for justice requires victories in the form of policy change and outright legal measures. But in the meantime, uplifting communities are a major step forward. So here we are; he caused a major commotion, and we asked him to be perfect in his execution. Save for a few missteps he’s succeeded. For that, we all ought to recognize Colin Kaepernick and everything he’s achieved in his short amount of time as the most infamous player in the NFL.

Since the initial writing of this piece, news has broken that Colin Kaepernick had decided the protest of the national anthem that made him infamous will end moving forward. This news comes just after he opted out of his contract with the San Francisco 49ers, making him a free agent for the upcoming season. The timing of this announcement and the fact that Kaepernick is now essentially applying for a new job leaves him up for the predictable criticism about how this might have all been some sort of shallow cry for attention. Given everything I’ve written about him in the above paragraphs, my position will obviously be against this sort of notion, while still admitting his marketability definitely plays a role in this decision. But that’s OK, there was no foreseeable end to this protest, and Kaepernick’s focus has clearly shifted to continued community involvement. We’ll always know where he stands, and thank him for his contribution to the national discussion. Another season of kneeling wouldn’t have moved the saturation point the way it did when the protest was a new and unexpected action. The pundits who suddenly claim to have jumped off the train or to have drawn a line at this point were probably never on board to begin with. By doing what he can to stay in the public eye and in the National Football League, I’m sure this will not be the last we hear of Colin Kaepernick as an active activist. I’m excited to see what comes next.