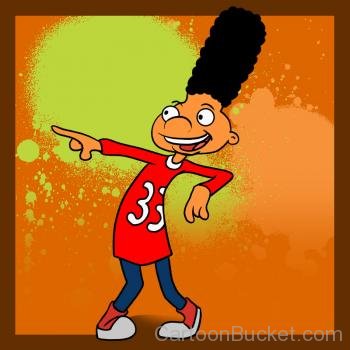 Okay, let’s all just take a second to pretend that eight seconds into the Hey Arnold! opening theme song, we didn’t see a young black kid drain a hook shot and then follow it up with a swag handshake with his best friend. Now let’s all smack ourselves in the face for even letting our minds entertain the idea of a world where that hook shot and handshake are anything less than iconic. That, my friends, is simply the impact that Gerald Johanssen has had on our lives.

Since every bored Facebook user of our generation loves to dive into the click bait memes claiming “only 90s kids will get this,” let’s start there. Gerald oozes 90s popular culture, especially from the black perspective. He dons a high top fade, who’s cultural influence at this point should go without saying. In fact, just the other day I was complaining to a friend about shaving his hefty beard (I get jealous because I’ve always wanted a full beard). His response: “yeah, well I wish you hadn’t gotten rid of your high top fade, so I guess we can’t always get what we want.” If that doesn’t explain the importance of the high top fade, even as it permeates society today, I don’t know what does.

It’s also worth mentioning that the “33” on Gerald’s shirt is most likely an homage to now hall of famer Scottie Pippen in an era of Chicago Bulls dominance. When a team in any sport dominates like the Chicago Bulls in the 90s, you’re bound to have bandwagon fans all over the country. You’d be hard-pressed to find anyone who didn’t fanboy or fangirl over at least one member of the Chicago Bulls in that time span. Gerald is no exception being a kid growing up in the heart of Manhattan and choosing to rock anything other than Knicks apparel. Couple the fade and clothes with the aforementioned hook shot from the show opening, and you’ve created a character that millions of black kids around the country can latch onto from the minute the show airs.

But those are just examples of Gerald’s superficial embodiment of black culture in the 90s. It’s imperative that we also discuss the nuances in his character because those are what make Gerald much more than just a relatable character in theory, but also in practice.

First and foremost, Gerald served as the primary storyteller in the world of Hey Arnold! More often than not, the urban legends presented in the show are narrated by Gerald and usually taken as or believed to be fact. The entire back story for the famous Stoop Kid episode (which will forever be enshrined in cartoon history) was told by none other than Gerald as the entire neighborhood of kids (and even some adults) gathered around to listen. From the perspective of the students at P.S. 118, Gerald was effectively a bard like that of medieval Gaelic and British society; integral in the further education of peoples and passage of history via storytelling.

Gerald also provided the voice of reason to compliment Arnold’s often headstrong decision making. To stick with the Stoop Kid example, Arnold decides that he’s going to go take his football back from Stoop Kid’s porch. Gerald warns Arnold that this may not be a good idea. Arnold knows this is true, but asks Gerald to have his back anyway as he still plans to attempt it. Gerald, of course, always has Arnold’s back. How could that type of friend not be lovable? We all have friends who are skeptics and sit back and wait for you to risk something only to tell you they told you so if or when it goes foul. It takes a real friend, a better friend to respect the decision you want to make and support you even if he disagrees with it. Arnold’s head was always in the clouds while Gerald stayed more grounded, but Gerald was consistently willing to catch Arnold’s fall from the sky if it came to that.

In conclusion, Gerald gave us a reason to like him just because of how he fit into the overall scope and feel of black 90s culture. He gave us a reason to love him because he earned the respect and admiration of his peers with his aesthetic storytelling and wisdom, and was also, simply put, the great friend with whom we all wish we could share a secret swag handshake.

Bonus: Gerald low-key wifed Phoebe at some point over the course of the series and I feel like the writers wanted it to be slick. You rarely saw them together overtly. They were always seen in the background holding hands or talking in certain scenes. I say that like we didn’t all know Gerald was definitely mackin’. But you know…he was putting in work.