– Diversity of Thought within the Black Community –

Roy: As a minority who’s historically leaned more conservative, do you feel like a free-thinker who has broken from the bondage of the democratic plantation?

A lot of the recent conversation surrounding certain people in the media and their political affiliations is about Black people mischaracterized as monolithic, when of course we aren’t.

The point of that ‘Key and Peele’ skit was to poke fun at Black Republicans who falsely consider themselves to be unique. To think all Black people are forced to agree with one way of thinking, and that they cast out people who don’t, is a pretty ignorant notion. There are obviously some shared ideals that are widely accepted, so when you go against them you’ll get blowback. But in my opinion, it’s really only racist white people who ignore the diversity amongst all that contribute to what we would consider to be Black opinions, and conclude that we all think in just one single way- in their attempts to try and convince us to lean more conservative.

Other than our objective phenotypic presentations, I would just argue that there are certain cultural commonalities to which not all, but significant amounts of us can latch on. And further, the notions that are widely accepted typically involve the institutions that oppress us.

Miguel: That being said, one of the bigger stories was around Donald Glover having a White wife/Baby Momma after the ‘This is America’ video dropped. And there was a lot of criticism stemming from the ‘Atlanta’ episode at Drake’s party when the interracial couple gets a lot of shit. Are we past the point of calling people sell-outs?

Roy: I think it’s safe to say that a certain percentage of Black women, given their long history of trauma, will always feel a certain type of way when they see a black man with a white woman.

As far as the criticism of that episode. I noticed a lot of folks arguing that a scene where a Black woman so aggressively confronts an interracial couple as that character did was a pretty antiquated trope. Those reactions do exist, and you can always find them should you choose to, but to say “getting shit” like it was an overwhelmingly negative reaction just simply isn’t accurate in 2018.

I always think it’s very important to recognize the social media cases where there’s a small, insignificant backlash to an event, and the counter-backlash becomes larger by several magnitudes.

Miguel: I regret agreeing to do this almost instantly, because debating politics because of Kanye is like debating the sphericity of the earth because Kyrie thinks the world is flat.

Roy: I think that’s a very important point, and the reason we’re here. We’re dealing with one of the most important figures in media, talking about very sensitive subjects… while clearly not reading… like even a page… of any book.

Roy: My reaction at the time of the initial tweets started with the usual  “That’s Kanye being Kanye” but quickly became “Dear God, I think I have to shower for each time I’ve listened to one his albums,” which will waste a lot of water.

Roy: The appeal to Kanye West is that as fans, we’ve followed him throughout his career acting somewhat compulsively. He’s allowed access into his true thoughts. He exudes this confidence in himself, because he truly believes in his own genius. It’s why we admire him so much, because we’d like to feel that same confidence ourselves too.

So, there’s a certain pattern of behavior from that Michael Myers incident, to rapping extremely goofy lyrics in his music, to his clothing style, to even that initial appearance at Trump Tower that all spoke to: Kanye is trusting his gut and going full out to do what he thinks is appropriate, new, and innovative

Miguel: Why do we care about what Rappers think in the first place?

Roy: It’s quite the conundrum. Right now in sports we see a lot of Black athletes using their platforms to help bring attention to important issues and exact positive change. If you wanted to have a dismissive attitude about their comprehension of nuanced subject matter, you would probably come off as racist… but it’s a thing you could do. So other than whether or not that a famous person is saying is lining up with my particular political beliefs, I’m not sure there’s a way to proactively decide who’s making valid points and who isn’t. I think we’re forced to just let celebrities use their platforms as they choose and then either accept those points or criticize them as they speak.

We can agree that #MAGA taking on Kanye West as their own, who has in the past said “ We shine because they hate us, floss cause they degrade us / We trying to buy back our 40 acres” is pretty fantastic right?

Miguel: Yeah… That will be short lived. 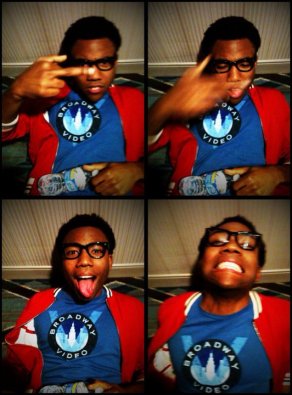 Roy: I feel pretty comfortable in my lane now. Earlier, I spent most of my life in school settings that were primarily White, while also in home and extracurricular settings that were almost exclusively Black. I had a solid foundational understanding of who I was, but certainly struggled at times to find the right expression of my background. I never felt like I had to “lead the movement” in high school and college, and more of my energy was put towards fitting in.

Derek: I can speak to a similar experience. For most of growing up, it wasn’t that my race wasn’t always a part of my identity, but rather that sports and being an athlete was much more the center of who I was. Now that I’m older, my race has been brought more to the forefront of my identity. I have engaged here in Boston with a few Black professional networking groups and through them, I have found communities where I feel supported and can discuss topics relevant to social justice and inequality.

Roy: Someone who’s known me for a few years recently said to me something to the effect of,

And that really sat with me for some time. When I reflect back on all that I’ve associated myself with over time, I think back on my very Black family and close friends growing up. I remember my WOC girlfriends, my heavy involvement in Black student organizations throughout high school and college, and my appreciation of Black-influenced music such as hip-hop, dancehall, and reggaeton.

It’s interesting to really evaluate the metrics by which people organize the world around them, especially when it comes to Race. When I was younger and experimenting with the means of which to express my identity, I would have been devastated by someone questioning my “Blackness.” But with maturity comes a greater understanding of how my outward presentation and cultural upbringing contributes to my overall identity, as well as how much or how little influence I choose for them to have. I too have spent more time around similar folks in similar situations with similar interests, and that’s really helped to carve out my own personal social space.

All that to say, I could understand from a superficial perspective what past image that person might of had of me. But at this point in my life, I’m confident enough to clown anyone, White or Black, challenging my Blackness for being terribly narrow-minded.

We don’t get to determine other people’s Blackness based off of preconceived notions of how one’s supposed to act, just as we don’t get to choose how we look in the first place. How one lives their life in each given situation is totally up to them.

Just try not to be trash.