This week #BlackTwitter has been ablaze with the “Kanye Madness” head-to-head matchups of the top songs by Kanye Omari West. The concept is in the traditional NCAA basketball tournament setup as the real “March Madness” is underway this week.

For the three of us, Kanye’s career as a rapper took off in that sweet spot in our lives of just coming into adolescence, with his third album Graduation and his Glow in the Dark Tour reaching us as we were becoming close friends in high school. So who better than this group to take a totally subjective concept, to which we then obnoxiously debate about to one another?

So without further adieu, we present our picks for the best-of-the-best from Mr. West. 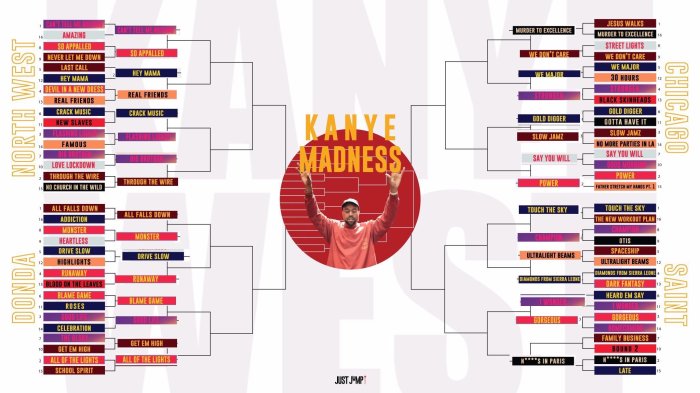 Roy: We all have ‘Can’t Tell me Nothing’ over ‘Amazing,’ which is the correct choice, but props to two great Jeezy appearances. One of my favorite things about Kanye is how perfect his work flows with random ad-libs and verses from so many different types of artists, especially in this case when it’s contraband-bagging Jeezy from the Trap.

Miguel: Jeezy-“And if I had a million dollars”/ Kanye: “I’d cop more pink polos and pop those collars”

Miguel: I just feel like the lyrics and the beat didn’t mesh and it was a waste of The Game. One of the things I’ll keep bringing up is how Kanye brings out the best in his features and this wasn’t the best Game by far.

Noel: Both of y’all however disrespected ‘Flashing Lights’ in my opinion. But matchups.

Miguel: If ‘Flashing Lights’ was anywhere else…but Famous had one goal. To piss people off and it did. Plus that was a classic Swizz Beat.

Roy: ‘Flashing Lights’ and ‘Famous’ both serve the same purpose in my current Kanye listening sessions. They’re both songs I may not seek, but also don’t skip. If I HAD to choose one though, I’ll bump ‘Famous’ in my living room from time to time.

Miguel: I have a vivid memory of driving through St. Louis and turning up the radio when ‘Famous’ came on… ‘Flashing Lights’ would not have had the same effect.

Roy: ‘Hey Mama’ over ‘Last Call’- There’s been a 12 seed over the 5 seed upset in the real March Madness, and that tradition holds true today. Also ‘Last call’ is something like 12 mins long??? Not that it doesn’t bump, but um… who has the time? But overall, ‘Hey Mama’ just resonates so sweetly. Given everything we know about how close Kanye was to his mother, it’s truly touching. Probably the best contemporary option we have to jam with our own mothers to since Tupac’s version

Miguel: I don’t think you can understand the evolution of Kanye without understanding how much he cared for Donda. After ‘Hey Mama’, you kind of understand why it All Falls Down (see what I did there). I gotta say though I could care less about New Slaves or Crack Music.

Miguel: ‘Addiction’ as a 16th seed was disrespectful.

Roy: ‘Runaway’ over ‘Blood on the Leaves’- This one has me hurt bad, because they both get plenty of spin from me in 2018. But if I have to choose one: the production, the Pusha verse, the lyrics that i unfortunately can relate to at times, and the replay-ability of Runaway gives it the edge. Fantastic openers for both, man.

Noel: ‘Runaway’ is a song that literally loses me in its orbit almost. With a 15 minute movie directed to accompany it…  speechless. While at the same time Blood on the Leaves doesn’t deserve to get done that dirty.

Miguel: I’m biased to anything on MBDTF since I consider it Ye’s best work. The production quality is unreal. My issue with ‘Blood on the Leaves’ is that it could have been used for so more. Instead, I’m listening to one of the darkest samples ever and he’s talking about partying.

Roy: I go back and forth about that. I mean, obviously he could have used that sample for one of the most politically charged/social justice anthems had he wanted to. But that isn’t exactly who Kanye has been. While he obviously touches on those subjects, his form of protest has always been defiance, one that says, “Look at me! I’m not supposed to be here, but now I am, deal with it.”

Miguel: The goal of Yeezus was to be disrespectful.  This waste of a sample and misuse of historical references succeed in that.

Kanye- “Now you sittin courtside/wifey on the otherside/gotta keep em separated/ I call that apartheid”.

Noel: Yeezus was about stripping the music down to its skeleton; as evident in the cover and lack of finishing/production on the tracks and take it or leave it lyrics.

For me immortalizing the sample and history behind ‘Strange Fruit’ is the success of the song. The number of people white and black that I have explained the implications to accomplishes, in effect, the result of social justice awareness-ish.

Miguel: ‘Blame game’ is an unappreciated track. Chris Rock made his verse/act in one shot and while it dont make no sense, to this day I can’t not laugh when he comes on.

Roy: Agreed. ‘Murder to Excellence’ over ‘Jesus Walks’- MTE being a 16 seed is flat out disrespectful, it’s criminally underrated. We do run into the same problem all through ‘Watch the Throne’ where Jay Z has obviously a solid influence. The difference here is Kanye sings the hook on this track and actually fares significantly better in the battle with Jay Z over song prominence. He washes Jay in my opinion

Miguel: I agree the seating was terrible, but I have an issue with all the Watch the Throne tracks in the Jay

+’Ye are better than the sum of their parts. Not sure if alone we would rank it so high.

I don’t think we have Chance the Rapper today if not for Jesus Walks.

Noel: ‘Black Skinhead’ v. ‘Stronger’ was interestingly controversial in my office. “Is Stronger really a Kanye song?” was the argument that came to mind as opposed to a Daft Punk song

Miguel: Really? Stronger invented the new era remix. Sample what’s already a hit and make it a bigger hit. Flo Rida sampling Levels. Pitbull sampling the Anthem.  Before this track sampling was about finding songs no one heard before. Ye re-invented it.

Roy: ‘We Dont Care’ over ‘Street Lights’- Really just off the strength of “We wasn’t ‘sposed to make it past 25…” which i’ll be saying legitimately on every birthday from here on out

Miguel: I had to look up ‘Street Lights’. Worse Kanye song with the word “Light” in it.

Miguel: Talk about strong featuring artists. The best tracks on this division all had amazing supporting acts.

Roy: Also on ‘Diamonds’, which I love, the remix is awkward because Kanye is telling us about blood diamonds and horrific tragedies in West Africa and Jay Z is bragging on himself. It sounds great, but then turns weird when you actually pay attention haha.

Miguel: True but… “I’m not a businessman, I’m a business, man. Let me handle my business damn.”

Noel: Only final thought is that Bound 2’s quality as a song is overshadowed by the controversy inevitably surrounding Ye et. al.

Miguel: Noel you only like Bound 2 cause it gives a shout out to Jamaicans.